How is COVID-19 Impacting Financial Decision-Making in Europe? - OneStream Software

How is COVID-19 Impacting Financial Decision-Making in Europe?

The COVID-19 pandemic had a major impact on the world economy as it broke out in early 2020, and it continues to impact many industries and organizations as we enter the 4th quarter of the year. Back in August, OneStream Software released the results of a survey of North American Finance executives highlighting the impacts COVID-19 has had on decision-making for 2020 and 2021. In September, we extended that survey to Europe to understand and contrast how the pandemic has impacted financial decision-making in major markets on the other side of the pond.

What did the results of the European survey reveal? While the themes were similar, there were some notable differences in the results. Read on to learn more and download the full report to see the details.

This OneStream-sponsored survey was carried out in Europe in late August and early September of 2020. For the European survey, we gathered responses from 278 Finance Executives in France, Germany, Italy, Spain, and the United Kingdom across industries.

The objectives of the survey included the following:

Here are some of the highlights of the survey.

COVID-19 ’s impact is most acutely felt in hiring. Not surprisingly, a most companies (44%) have reduced hiring due to pandemic-related financial challenges. However, the percentage of companies where COVID impacted hiring was higher in North America at 57%. Many have also reduced temporary/contract staff (38%) or implemented layoffs/furloughs (29%). One of Europe and North America’s top four responses was the adoption of technology (42%), most likely to support a remote workforce during the crisis. 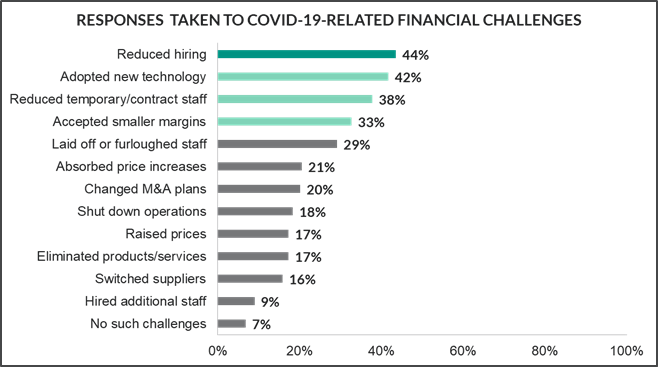 In the European survey, hiring reductions were most prevalent in the UK (56%), while companies in Italy (57%) and Spain (50%) were most likely to adopt new technology in response to the pandemic. 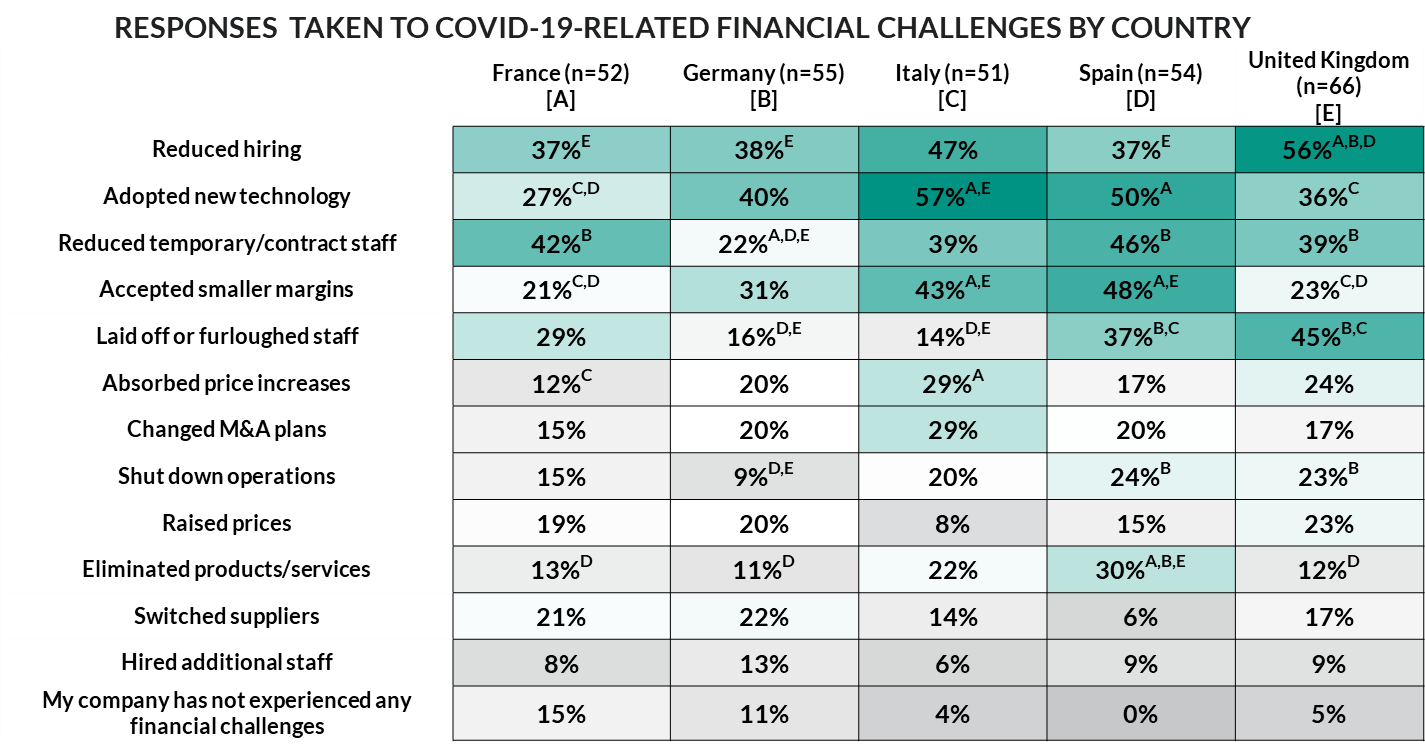 Companies are investing in and prioritizing their IT/Cybersecurity departments. Consistent with the North American survey, IT/Cybersecurity departments are the most likely to have received remote work-related upskilling/training (55%) and are the most likely to be prioritized when it comes to hiring in the near future at 60%. However, while Accounting and Finance was the 2nd department being prioritized for upskilling and hiring in the North American survey, European companies prioritize Customer Service, Marketing/Sales, and Research & Development. 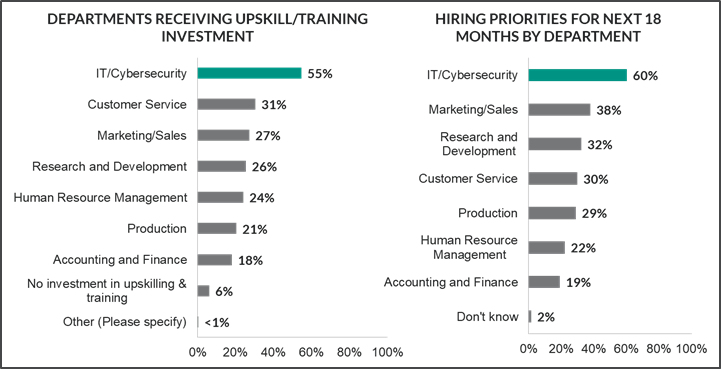 Companies are most closely tracking Sales/Revenue and Consumer Spending as indicators of financial recovery. The responses here were consistent with the North American survey, with Sales/Revenue serving as the top measure of company level recovery. At the same time, Consumer Spending is the leading indicator of the state of the macroeconomic environment. As with the North American survey, the results here were a little surprising. We expected to see finance executives focus more on “leading” indicators of recovery such as Sales Pipeline and Orders from an internal standpoint. Externally, we expected to see a stronger focus on leading indicators, such as Consumer Sentiment and the Purchase Managers Index. 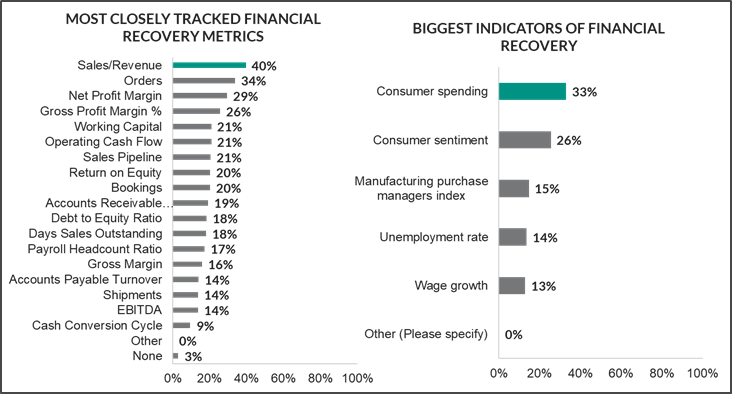 Only 42% of companies are deferring investment decisions until after the US elections. Not surprisingly, the response here was much different from the North American survey, where the majority (61%) of companies were deferring some investments until after the US elections. In Europe, investments being deferred include launching new products (39%), further global market expansion (39%), hiring and staffing (34%), and facilities expansion (32%). This data reflects a cohort largely in tune with how the election outcome could have significant impacts on tax, economic and trade policies. 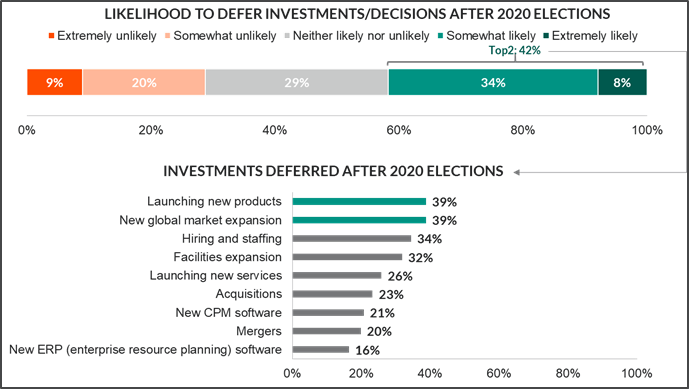 Finance decision-makers in Europe are more pessimistic regarding their current read of the near future economic and regulatory atmosphere. The share that is pessimistic and anticipate budget decreases is 45% vs. those who are optimistic and anticipate budgetary increases (32%). This contrasts with the North American survey where respondents were more evenly split on their outlook. 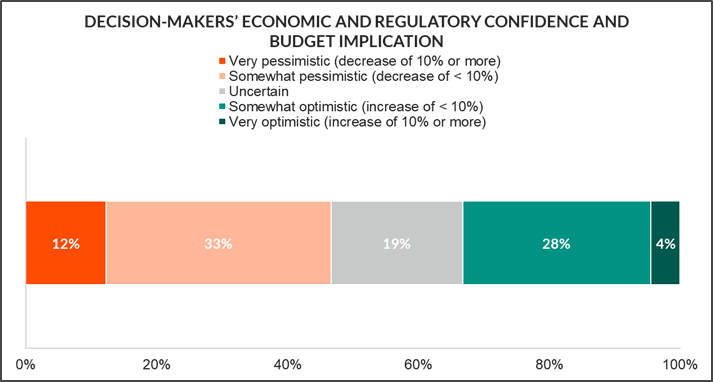 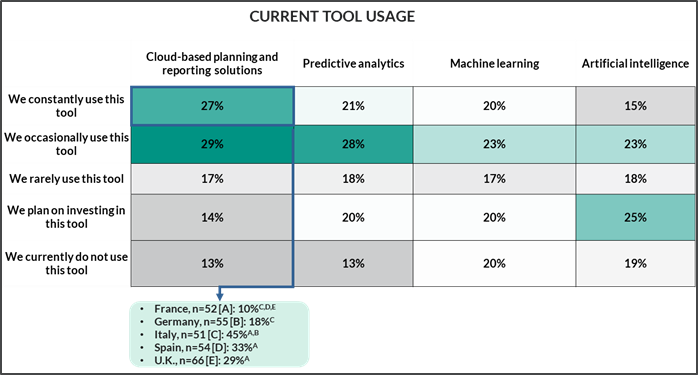 Summary and How to Learn More

Given the impact of the COVID-19 pandemic on the global economy, it’s essential to understand how financial decision-makers respond to and plan for unprecedented challenges. The biggest levers most companies in Europe and North America pulled in response to the economic downturn felt in 2020 were hiring and staffing. In Europe, less than a third of companies that responded to the survey reduced staffing.

One of the notable surprises in both the North America and Europe surveys was that 42% of respondents indicated they invested in technology due to COVID-19. This trend correlated well to the increased investment and staffing respondents indicated for IT/Cybersecurity. It was encouraging to see organizations beefing up their back-office operations during the disruption, so they are better prepared for the recovery – although North American companies also prioritized hiring and investments in Accounting and Finance over other functions, which took priority in Europe.

Another surprise in the results was the focus on lagging metrics to measure the recovery – e.g. Sales/Revenue and Consumer Spending. We expected to see more focus on leading indicators here. Still, maybe this demonstrates the “show me the money” mentality of finance executives who want to see actual sales/revenue coming in vs. looking at pipeline or consumer sentiment.

With the US elections looming in early November, it was not surprising that a higher percentage of US companies (61%) are delaying certain investments until after the election, vs. European companies at 42%. In both cases, these organizations are expecting some significant policy changes as a result of the outcome.

In terms of software tools being used to navigate the COVID-19 disruption, it was encouraging to see more than half of respondents in EMEA using cloud-based planning and reporting tools. However, the adoption rate is higher in North America. It was also encouraging to see the increasing interest in machine learning and artificial intelligence tools. To learn more, download the complete report on the Hanover survey results and contact OneStream if your organization is looking for a software platform that can help you plan and navigate your way through this volatile economic environment.